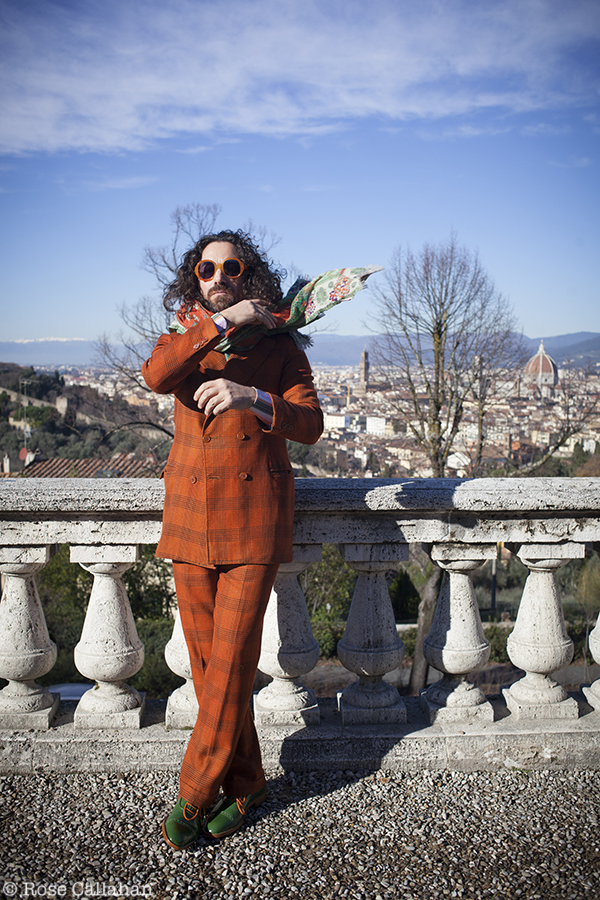 Here is the delightful and vibrant Mr. Danilo Verticelli on a sunny crisp January day in Florence in 2016. I was introduced to him my the great photographer Danielle Tamagni, who among other things created the legendary book about Sapeurs in Brazzaville titled Gentlemen of Bacongo. Danilo drove his beautiful Jaguar up from his home in Livorno and met me, Nathaniel Adams, my We are Dandy co-author, and Kelly Bray who was filming all the while. I was stunned by the gorgeous light that day coupled with the spectacular view...and all those colors! Unfortunately this profile was one of far too many that didn't make it into We are Dandy, so I would like to share with you now. The writing that follows is by Nathaniel Adams. Enjoy! 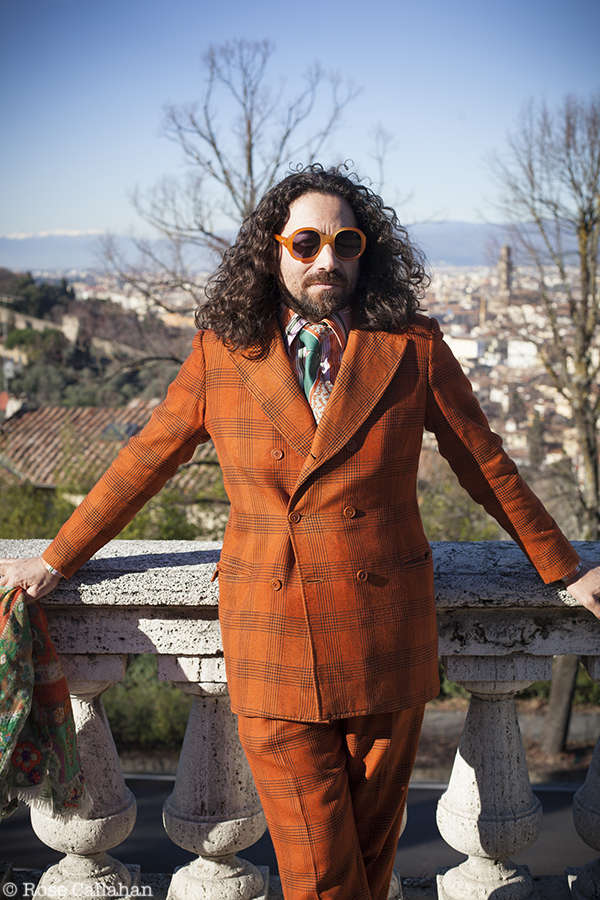 Asked to pick a location for a photo shoot, Danilo Verticelli chose one of the highest hills surrounding Florence, overlooking the city from the South. Atop this hill is the San Miniato al Monte basilica, named for a Catholic martyr who, after being beheaded by Emperor Decius for his faith, was said to have calmly stood up, picked up his head, tucked it under his arm, and sauntered up the hill, presumably unmolested by Roman centurions too shocked or grossed out to stop him. Despite the beauty of the church and the unsurpassable sweeping view of Florence, the site’s relative remoteness makes it one of the city’s less frequently-visited tourist destinations. So when Verticelli pulls up in his Jaguar XJS 4.0 wearing a pumpkin orange suit and big round sunglasses, his curly hair falling to his shoulders, there are only a handful of visitors to gawp slack-mouthed like Roman centurions at a headless saint. 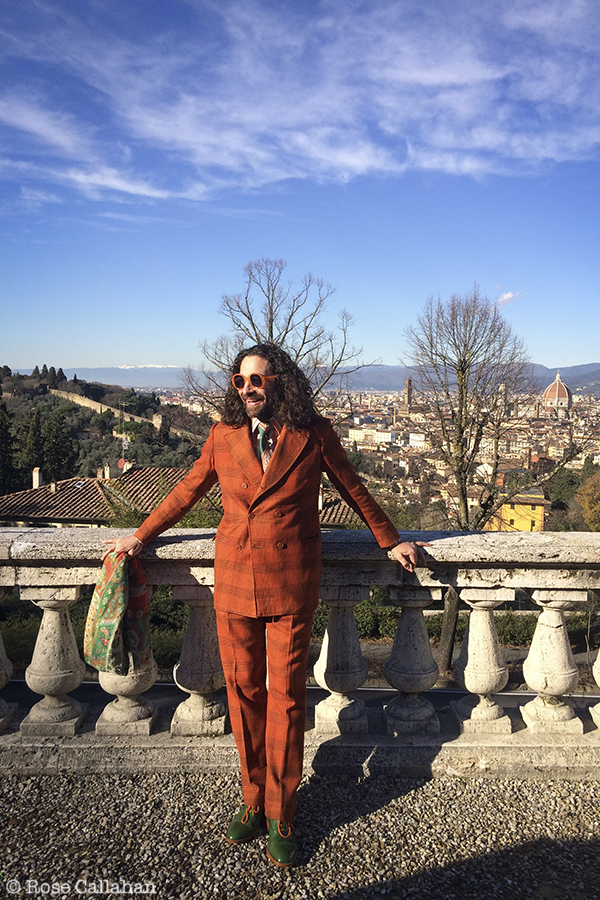 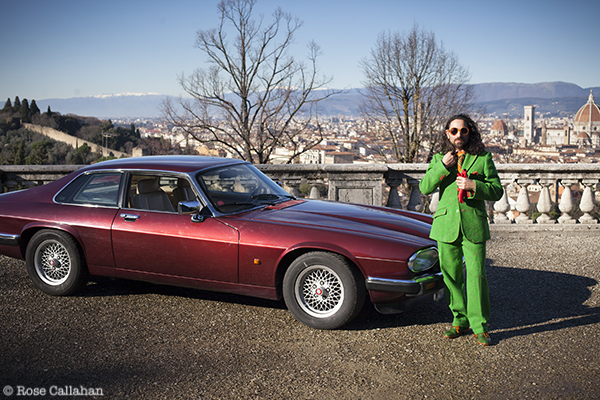 Verticelli is 53 years old, and had dressed in a formal and subdued way most of his life, in typical grays and dark browns. In 2006 something in his soul erupted. He quit his job as an engineer to focus on his art and design and, in his words, “I discovered color.”

“I don’t know why,” he confesses, speaking softly beside the purr of his idling Jaguar. “There are things inside us and sometimes they awake suddenly.” 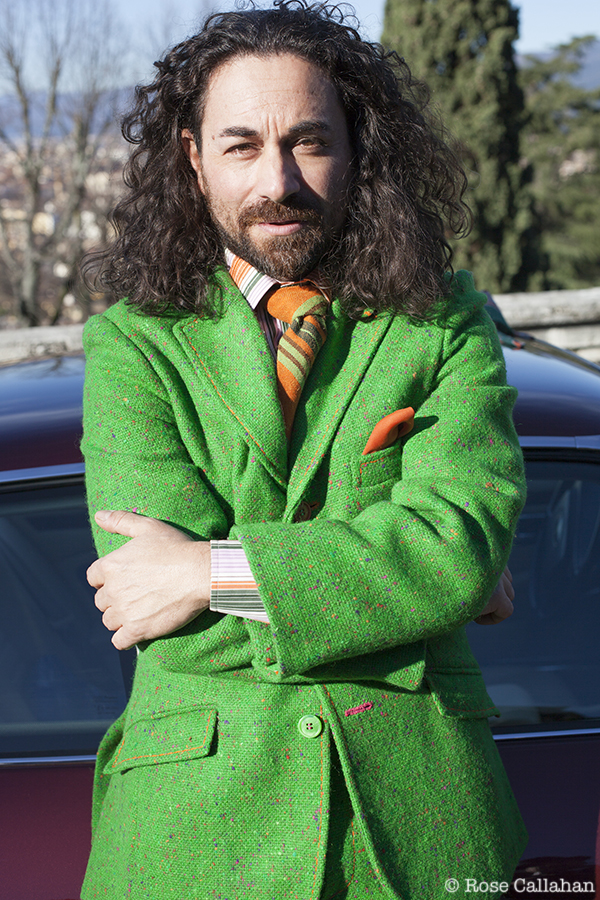 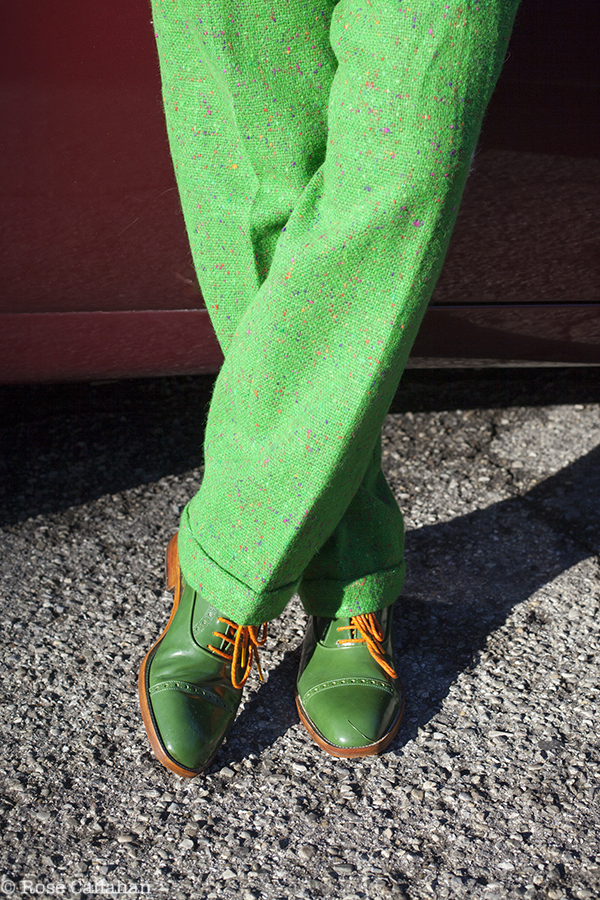 Unable to find clothes in the bold shades of fuchsia, orange, and green that he wanted in Italy, Verticelli began to dye his old suits and suits found at thrift stores before having things made in bright, imported fabrics by a local tailor.

“The first time I wore it outside I was very worried about what [people] would think and say about me. My friends respect me very much, but people on the streets were laughing at me,” he recalls. “It is the destiny of people who are different.” 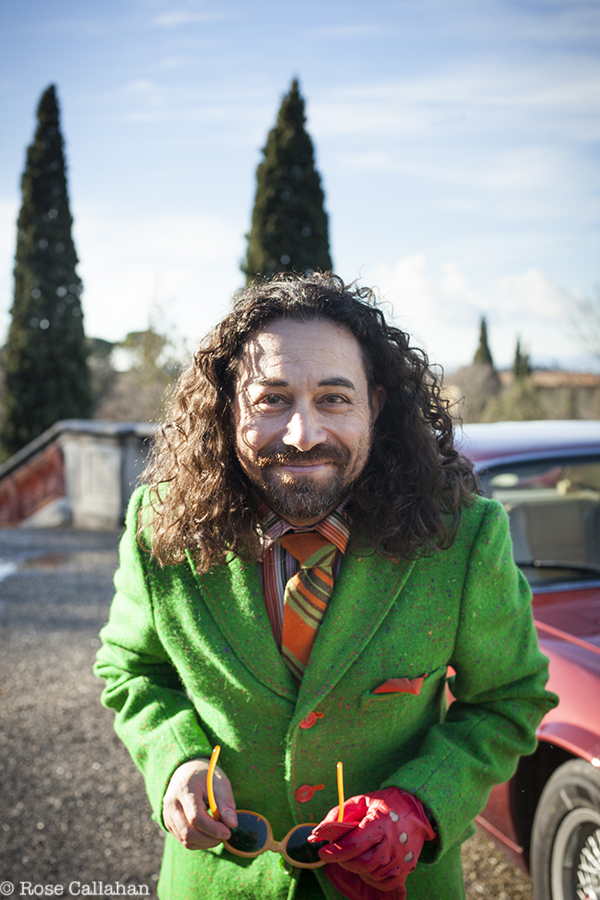 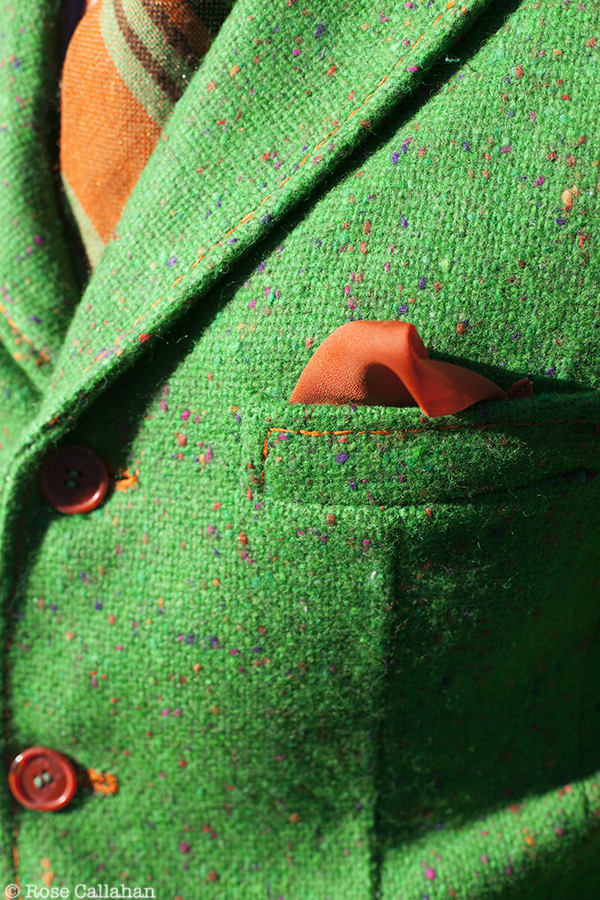 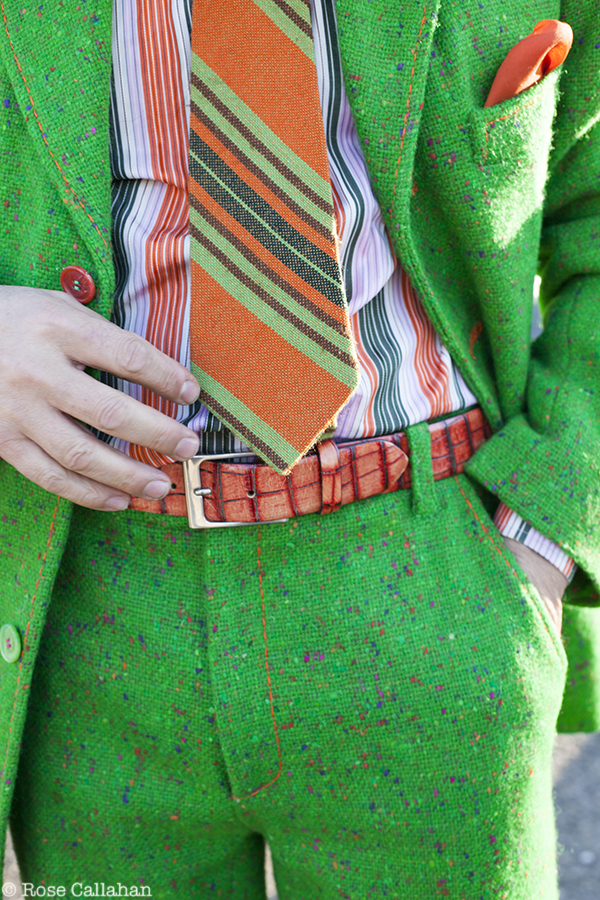 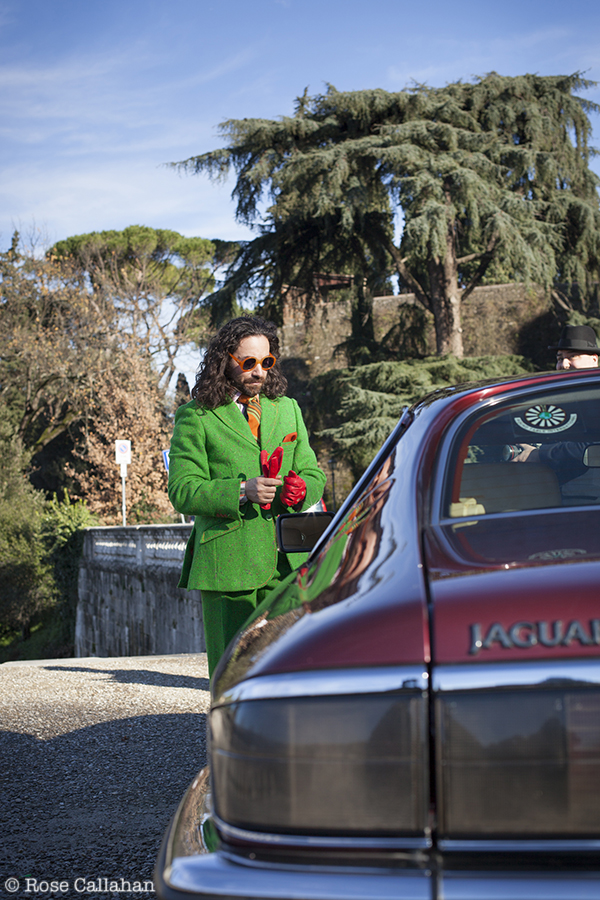 The shoot over, Verticelli gets back in his car, revs the engine, and drives down the hill, a small clutch of tourists and pilgrims taking photos and videos as he speeds away from the martyr’s shrine and resting place. 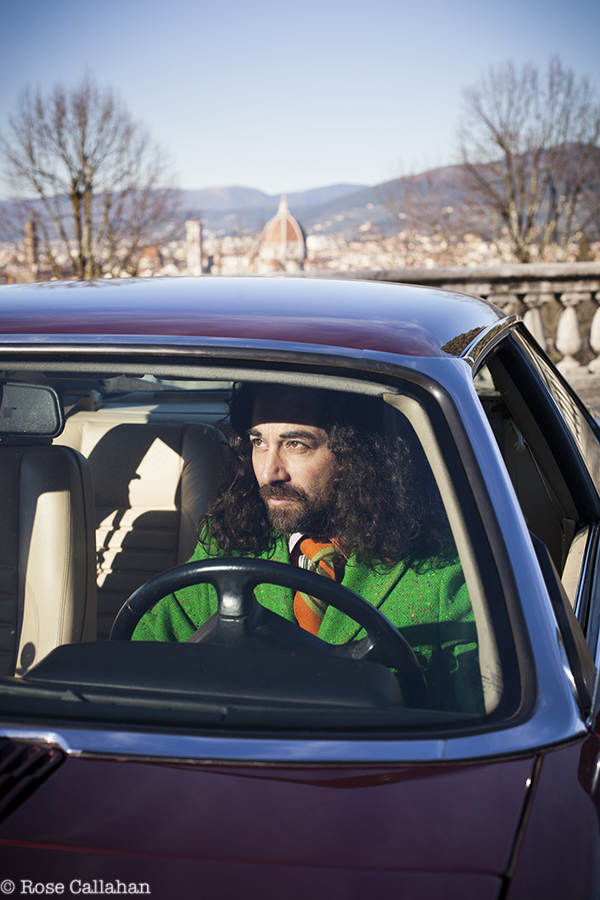 Email ThisBlogThis!Share to TwitterShare to FacebookShare to Pinterest
Labels: dandy, Danilo Verticelli, Italy, We are Dandy